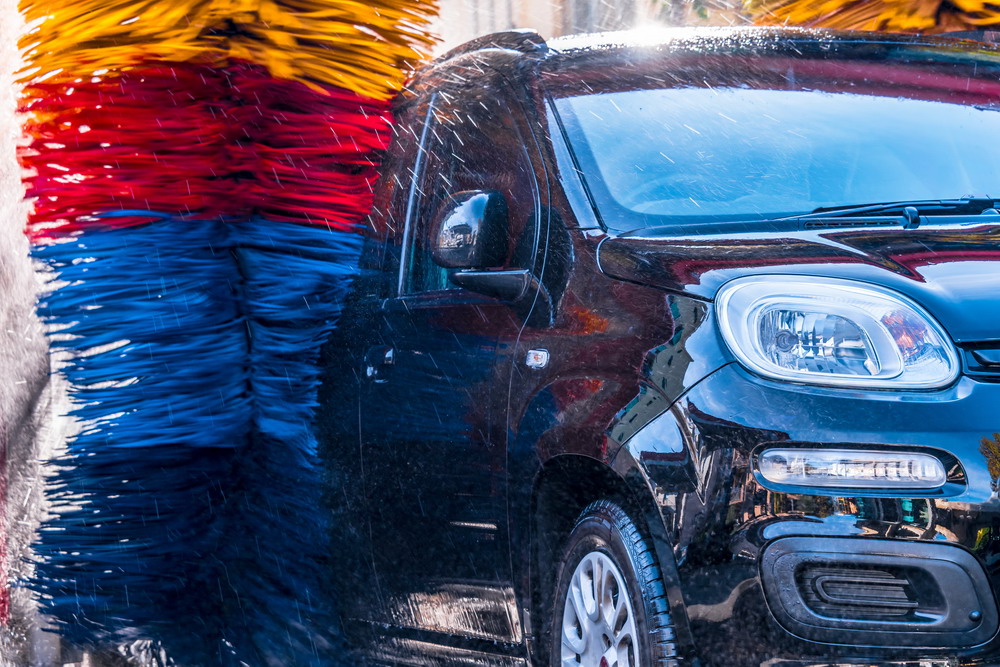 The Car Wash: An Icon of Automotive Automation History

Taking your car to the car wash is a pretty straightforward task. You pull up, tell the attendant what you want (or use a touchpad kiosk), make payment, then drive right in. Automation takes care of the rest. Suffice it to say that commercial car washes were not always so technologically advanced.

The great American car wash is an icon of automotive automation history. You can follow the technological advancements of the car wash industry as they coincide with automotive manufacturing advancements. In other words, the two have evolved side-by-side. Today’s car washes are just as technologically amazing as the cars they clean. They seem simple to the untrained eye, but there is a lot going on behind the scenes.

Where It All Began

No one is quite sure who was responsible for the first commercial car wash. AAA says it was two Detroit businessmen named Frank McCormick and J.W. Hinkle. They apparently opened the Automobile Laundry in 1914. However, their commercial car wash was neither mechanical nor automated.

Instead of a driver pulling their car up onto a mechanical conveyor track, workers would push the car through the wash manually. They would stop at a number of stations along the way, where other workers would do the actual work of cleaning the car. The entire process was labor-intensive and time-consuming.

AAA says the first conveyor-operated car wash opened in Hollywood, CA in 1940. That was a big step up in that carwash owners didn’t have to employ people to push. But all the washing, waxing, and drying were still done manually. There were no automated washing and waxing machines at the time.

The Start of Automation

The car wash industry took another giant step forward when a man named Thomas Simpson installed an overhead sprinkler in his car wash. That sprinkler system is still considered the very first successful effort at automating some car wash functions.

Simpson’s efforts were followed in the 1950s by another entrepreneur named Dan Hannah. He is credited with developing automated washing equipment for his own wash, which he opened in 1955. Hannah had working equipment ready to go by 1959. It worked so well that he began installing it in other car washes. His company went on to become the leader in car wash equipment manufacturing in the 1960s.

The two biggest changes to modern car washes in the post-Hanna era involve the introduction of lasers and digitization. Lasers for the car wash industry came into their own in the late 1980s and early nineties. Installing lasers gave automated car wash equipment the ability to accurately measure each car as it passed through the system. Washing equipment could automatically adjust to size, body style, etc. for a better clean.

Lasers are still in use today. They only enhance the automatic car washes now equipped with digital technologies. Lasers still provide the most accurate measurements for digital washing equipment designed to give the best possible wash while making as little physical contact with the car as possible. But in the end, contact is still necessary for a truly clean car.

Car washes in the 21st century can be completely automated if that is what owners choose to do. Fully automated washes are found across the country, in big cities and small towns alike. However, there are some companies that still believe in the importance of human contact. They are more likely to operate semi-automated car washes.

In a semi-automated scenario, cars tend to pass through long tunnels on mechanical tracks – the same way they did when the conveyor system was introduced back in the forties. Attendants are there to monitor washing equipment, collect payments, and hand dry vehicles when they come out of the tunnel.

Some fully automated car washes still use the conveyor system. However, the majority of them move the equipment rather than the car. In other words, the driver pulls in and puts the car in park. Automated washing equipment moves back and forth in the wash bay. This system is more energy-efficient and requires less maintenance.

Plenty of Ways to Keep Your Car Clean

So there you have it. The evolution of the car wash has coincided with the evolution of automotive technology itself. In the modern era, we have plenty of ways to keep our cars clean. Some of us go to the automatic car wash on the other side of town. Others prefer the semi-automatic wash with the human attendants. A lot of people still insist on handwashing at home.

If you want the best of both worlds, you can pay a professional detailer to wash by hand and detail the interior. Hand washing remains a viable business in many parts of the country, especially the deep South. The question is whether hand washing is any better than machine washing.

Car Fast Cash, a Southern California company that buys cars in San Bernardino, Los Angeles, Orange, Riverside, do not advocate one type of car wash over another. Instead, keeping your car clean goes a long way toward boosting its resale value when it comes time to sell.

A clean car is one that looks good to potential buyers. It is also less likely to show damage from road debris, bug guts, tar, and even UV exposure. It is like anything else. Taking good care of your car includes keeping it clean. The dirtier your car gets, the more often you need to take it to the car wash or hand wash it at home.

Thanks to automation and digitization, modern car washes do a better job of getting cars clean. They are also more efficient. Yet regardless of old or new technology, the car wash remains an icon of automotive automation history.

How To Use Bitcoin Lifestyle And Earn Money Fast – 2022 Guide

Pros and Cons of Leveling-Up In Battlegrounds in WoW

Are GMC and Chevy the Same Thing?